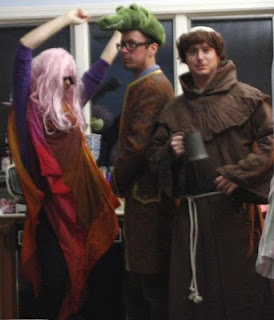 That was probably my lamest Halloween ever.

I love Halloween but I can never seem to plan ahead for it. This year was the worst. I didn't even carve a pumpkin. Pete went out at dusk and searched the town for Jack O' Lantern material and came up empty. I was considering painting a cardboard box orange, cutting out a face and putting a candle in it. Pete thought that would be a fire hazard. Finally he found the last rejected plastic electric Jack O' Lantern at Walgreens. MIraculously we had a round or two of Trick Or Treaters before he got back with it, before we had any decorations up.

Our neighborhood gets TONS of kids on Halloween. We always run out of candy. This is in spite of the fact that I often see gangs of kids passing our house by. My theory on this is that our yard is unkempt and our aluminum siding is really old and cruddy looking. We look less prosperous than most of our neighbors (yes, we're that house on the block) so some of the kids think we're weirdos and don't want to risk our candy. Theoretically that would mean more candy for me but in reality it doesn't matter. Even though we're the rejects we still run out of candy (They're right about the weirdo thing but we still have great candy)

I was going to lame out on a costume this year but Marc, who had a monk's costume complete with tonsure wig, egged me on. I managed to cobble together a rather sad Disco Diva outfit: long pink wig with iridescent strands, glitter on my face and hot pink lip gloss, an awesome silk-esque poncho, pants, gold platform sandals and sunglasses. That was a serious comedown for me. It drives me nuts when girls (not little girls but girls, say sixteen or over) go the cute/sexy route. It just seems like such cop out: "I'm gonna be a cat (so I can wear a leotard and ears and the boys will think I'm hot)" Maybe that makes me a no fun sourpuss. I prefer scary for Halloween. But this year the best I could manage was Disco Diva. If I'd thought about it some more maybe I could have been an O.D.'d Disco Diva. That's okay. All I did was hand out candy to kids and I wouldn't want to have to tell them (and their parents) what I was. I got a lot of compliments as it was from the girl Trick Or Treaters. The other bummer thing about my costume was that as someone who dreamed of being a disco diva back in 1978 I know how inaccurate my costume was. The wig was all wrong and I should have been wearing gold stretch pants and a tube top under my poncho.

Fay got a lot of compliments too. 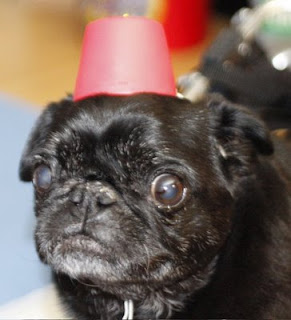 The final nail in my Lamest Halloween Ever coffin was that I went to bed at 9 while the Trick Or Treaters were still coming and going. I was still pooped from our red-eye.

Well there's always next year.
Posted by Unknown at 7:04 PM

Don't feel bad, Mel. I've become one of those turn off the lights and hide in the back of the house people.

I know. Halloween is like our major holiday, but unfortunately, most of the people who come to the door don't wear costumes, want to fight my pit bull and belong to gangs. Not sure I want to open my doors to that.

So instead, we did Thai food and hung out. All mellow like. Happy Halloween!

It's all about bringing the disco diva attitude, which, at least from what it looks like in the picture, you totally have. I didn't dress up in anything. I always have big plans for costumes, then I end up not doing anything. LAME!

You guys look pretty much in the spirit to me.

And hey, mean kids knocked my 6 little mini-carved-pumpkins off the wall ! even though I handed out candy to EVERYONE... (including the adult/teenage boys without costumes - this mostly due to my fear).

So, I am not sure it makes sense to carve pumpkins next year. It was fun... but they were wrecked by jerks overnight. I was hoping to watch them grow old, moldy, and mushy.

The best costumes at my boyfriend's door were two very cute 12 year old girls dressed up as Nicole and Paris. They had real, home-made costumes, and you would have LOVED the wigs and make up. They even had fake pets and a baby, (you should have heard them squeal when I told them my name is Harlow too)......

Your Disco-Diva looks great. So do your two side-kicks. Fun. I was a Voo-Doo doll again. This time... a little more horrific.

I didn't even pass out candy this year. But in all fairness, I was a bit creeped out by events that took place earlier in the day and really didn't feel like opening my door to strangers, children or otherwise.

Last weekend in New Orleans, I thought of you when I donned my friend's hot pink wig and ventured out on Bourbon Street. :)

We skipped halloween entirely this year. So you're waaaaay ahead of me.