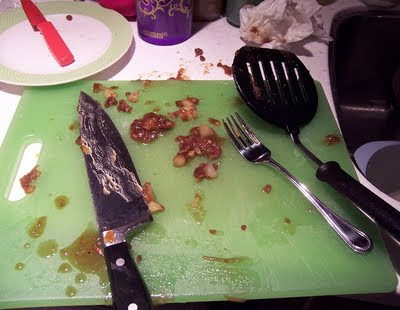 Tonight I had one of the two biggest baking disasters of my life (tonight being September 29th when I first wrote this post)
I was making the Upside Down Pear Gingerbread cake from Sticky Chewy Messy Gooey with the last two pears from our tree this year. A combination of things screwed me up:
I read in the oven owners' manual that when baking in this oven it's best to crank the temperature up another fifty degrees from the temp suggested in the recipe. That I did. I shouldn't have in this case.
The recipe says to remove the cake when its surface is firm and shiny and pulling away from the sides of the pan. The surface of the cake was all of those things and well browned to boot. Below the surface the cake seemed a bit squishy. I looked at the timer and it said 1:57 so I went ahead and unmolded the cake. I ended up with a bubbling puddle on the plate. The cake was nowhere near done. I looked back at the timer and what it really said was 5:57.
It may not have helped that the ingredients were not exactly "room temperature," assuming room temperature ranges from sixty-two to sixty-five degrees.
I put the cake pan back over the puddle, shoveled the "cake" back in as best I could, and returned it to the oven (at a lower temperature) Here it is, restored to the oven: 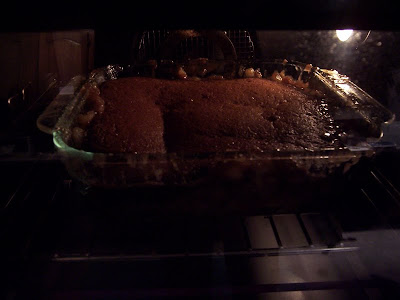 Some of the "cake" ended up on the floor. Fay was pretty happy about that.
I ended up cooking the cake for another fifteen minutes since it clearly needed more than six to solidify.
Here's what I got when that fifteen minutes was up: 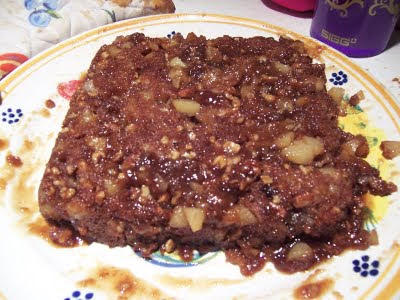 A miraculously cohesive (if hideous) slab.
A slab that you can get an actual slice out of! 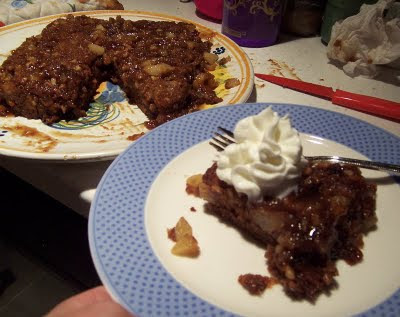 So I guess this is the second biggest baking disaster of my life. The worst was the time I turned the gas oven on to make Pete a birthday cake and forgot to turn the dial back to 350º. I "baked" his cake on broil. That was unsalvageable. Fortunately he didn't want a cake. He doesn't especially like sweets.
I'll have to try this recipe again sometime to see what the textures should really be. Maybe it's prettier when done correctly too. It's a tasty cake even in this state.
Posted by Unknown at 10:04 PM No comments: 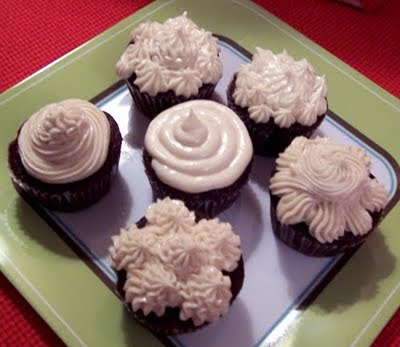 Vegan Cupcakes Take Over The World (again)
And I had a little fun with the pastry bag.
Posted by Unknown at 8:20 PM 2 comments:

Email ThisBlogThis!Share to TwitterShare to FacebookShare to Pinterest
Labels: baking

Finally I'm beginning to make things again. Perhaps soon this will lead to me having a coherent thought about something?
I can dream.
Till then I'm off to go watch On Demand mysteries.
Later!
Posted by Unknown at 10:14 PM No comments:

Email ThisBlogThis!Share to TwitterShare to FacebookShare to Pinterest
Labels: foolishness, the future

Going places where expert gardeners have been at work for over a hundred years (like Newport, RI or the Hamptons) makes me want to plant a lot of beautiful, expensive trees that I'll never see mature.
Can I ever just dig a hole and put a plant in it? The answer is no. I always have to explore around a bit, dig up invading grass roots and make the whole task take three times as long as I think it will.
If I had a kingdom I'd probably trade it for some nice shrubs.
Posted by Unknown at 3:50 PM 1 comment:

Email ThisBlogThis!Share to TwitterShare to FacebookShare to Pinterest
Labels: gardening

The pumpkin pancake recipe I mentioned a couple of days ago says it makes eight to ten pancakes. What if you can't eat eight to ten pancakes? Well make them all.
It just so happens that they make great snacks later on. I put my spares in a baggie in the fridge and eat them out of hand without syrup later on when I'm feeling peckish. Unless I've left them out uncovered on a plate and hit them little by little all day long. They aren't sweet when you eat them plain.
Posted by Unknown at 8:18 PM 1 comment:

Email ThisBlogThis!Share to TwitterShare to FacebookShare to Pinterest
Labels: cooking 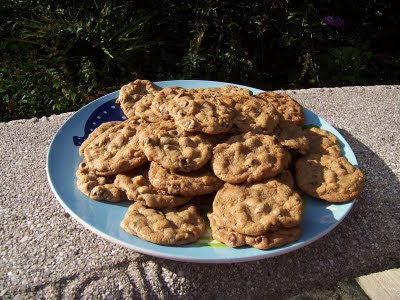 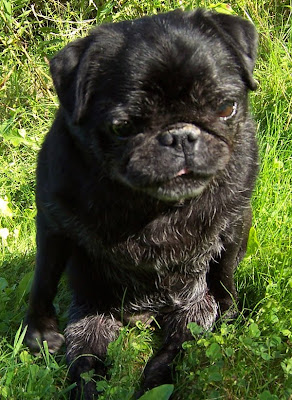 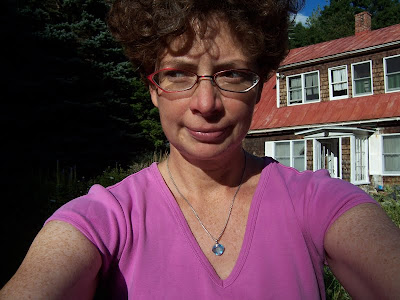 Posted by Unknown at 5:13 PM No comments:

Always Recycle TO THE EXTREME! 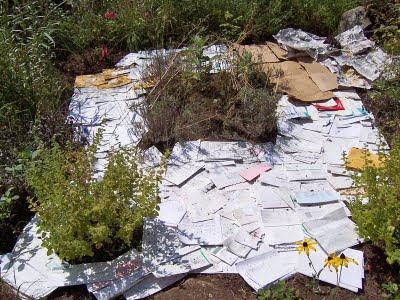 Today I tweeted "I just figured out that I can use my old tax documents as a weed barrier under my mulch." As you can see that wasn't an idle threat. I like this idea much better than throwing them all on the burn pile.
Posted by Unknown at 1:47 PM 1 comment:

It's like a miracle! My schedule and the weather both smiled on me today.
And look what I found - a September asparagus!

I didn't know there was such a thing. I'm not going to eat it out of respect for its survival abilities.
I weeded out the herb/rose garden. 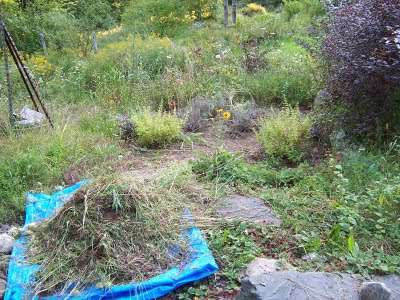 I used this photo because I'm proud of the giant pile of weeds I amassed on the tarp.
Here you can see the ground I covered (or uncovered) better: 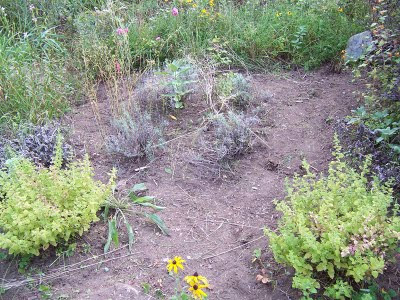 The roses look terrible for the most part. This summer was too wet for them and because I didn't have time to clear around them the air circulation was poor. I hope they recover next year. Similar story for the lavender.
I also found fragments of the discarded skin of a huge snake. I never saw the snake itself though, much to my disappointment. I wanted to see if it would creep me out with its size. Small snakes don't creep me out.
I was creeped out by a rather aggressive worm, come to think of it. It burrowed furiously towards my gloved hand rather than running away. Yeeee. I was glad I was wearing gloves.
Tomorrow I mulch. Very exciting.
Posted by Unknown at 5:36 PM 1 comment:

Back to Making - At Last 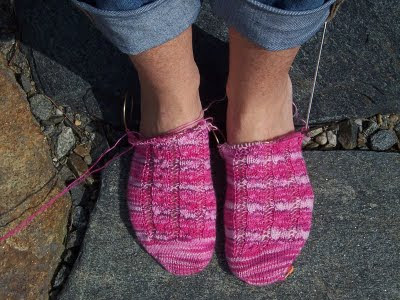 Here is a current project I'm working on: I'm knitting two cabled socks on one circular needle. They're going to be knee socks. I've kind of been dragging my feet on this project, I'm not sure why.
One good thing about knitting socks this way is that I know these socks will be exactly the same in all measurements. Working toe-up means I'll be able to tell in time if I'm running out of yarn.
The only bad thing about working this way is that it feels like it takes unusually long to finish a round for sock knitting. I have to remind myself that it's really a double round, maybe more like a sweater than a sock.
Posted by Unknown at 10:52 AM 2 comments: 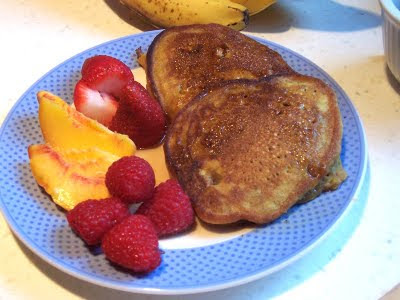 September first arrived in Vermont brisk and beautiful. It was forty degrees out and sunny when I woke up this morning. A perfect morning for pumpkin pecan pancakes.
Jenn found the recipe on Marthastewart.com (by the way, if you're ever trying to find something on that site their search engine SUX. You're better off just googling it) I added the pecans. Thanks Jenn!
Posted by Unknown at 9:35 AM 1 comment: