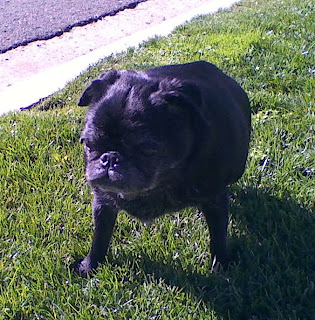 She is very bad.  She doesn't care at all that we're in California.  She wants her breakfast at 4:30 eastern time.  Then she wants more food at half hour intervals after that.  She's noisy and determined.  I had to shut her in the bathroom with her kong full of peanut butter last night.  Even then she was pawing at the door complaining.  Trouble maker!
Posted by Unknown at 2:37 PM 1 comment:

Not happy.  My computer fell off the table where it was charging and died.  We're traveling so I don't have access to my backup hard drives.  Also, my iPad was plugged into the computer when it fell so the iPad is compromised too.

That is the tip of the iceberg though.

The first Christmas without Dad is being more challenging than I though it would be (for me at least) so I'm in a crappy mood to begin with.

Hey - at least the weather's nice, the company's good, The food is good, Fay is healthy, I have a home to go back to, I have back ups for most of my files, my novel is safe and overall I'm in good shape.

There's light around the edge of this black cloud.  Now I need a good wind to blow the damned thing away.
Posted by Unknown at 2:45 PM 3 comments:

I Could Pace Myself...

but why?  It's not NaBloPoMo.
Evidence of more half-assery: 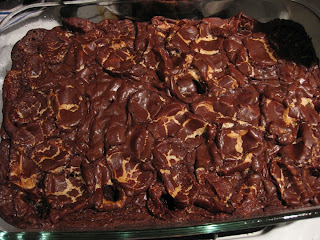 This is what you get when you cut up marshmallows and put them in your brownie batter.  Looks intriguing, no?  I assume it would taste a lot better if the marshmallows aren't stale, the canola oil isn't rancid and the brownie mix hadn't expired in 2008.  Yes, I did that too. 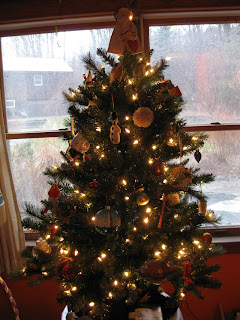 Our fake tree.  If you look closely you can see that it has both pine and fir branches.  We've had this tree for years but I just noticed that this year. 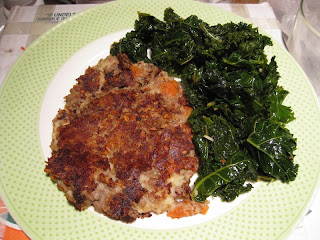 Left-over pancake!  An underused culinary option in the age of microwave ovens.  This one is left over neeps and tatties with skirlie and a side of kale.  Of course it is.  There's some kind of meat stew mixed in the pancake too.
Posted by Unknown at 11:57 AM No comments:

This blog should really be called "I Half-ass My Way Through Things, Seeing What I Can Get Away With Without Doing Anything Properly"

I just spent a fun couple of hours completely failing to make a pillowcase.  It really was fun - I learned a lot.  I didn't wreck anything either because I used material from a filthy old sheet as a tester.  That was probably the smartest thing I've done all day.  My first pillowcase came out so wrong that I'm definitely going to make another one out of more filthy sheet until I get the measurements and technique right.

I may also need to find a new sewing machine.  Wouldn't that be nice?  Maybe a fancy overlock machine.

I have craft hubris.  I think I can make anything easily.  It cracks me up to find out how wrong I am.  I sure have fun trying though.

I told my friend I'd knit her two pillows.  We picked out the yarn and a fabric backing and I knit the yarn part.  Now I find out that I need to back the knitted part with fabric to help it keep its shape.  I also want the pillow to be removable so that she can wash the case if she needs to.  That's the tricky part.  Instead of just sewing up a rectangle of fabric and sewing the knit part to the front of it, I'm sewing an envelope out of two different fabrics (one fancy, one plain) with velcro closure.  I'm sure I'm also over-thinking and over seaming.  I got really into the preliminary seam ironing too.  I love ironing - it's so peaceful.

In the end I came up with a design I liked but it didn't fit the pillow at all.  Now I have to re-measure and try again.  I'm sure I'll manage eventually.

I don't really know how to sew.  I learned how to use a sewing machine in high school when I volunteered in the costume workshop.  I made a yolked button-down shirt for one of the boys in "Our Town."  Classic.  That's all I made.  One shirt, twenty-seven years ago.  Still, I consider myself comfortable with a sewing machine.  See - hubris.  I should definitely invest in an overlock machine.
Posted by Unknown at 4:37 PM 1 comment:

I know, I know - but look how cute they are!  From Mod Cloth. 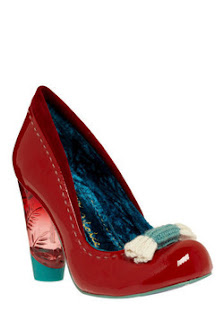 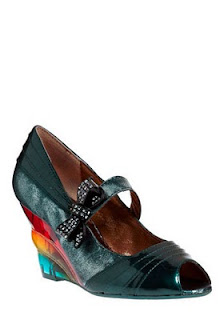 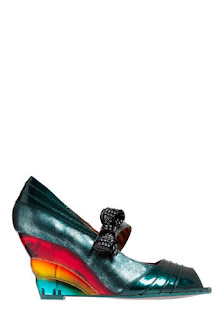 Posted by Unknown at 5:43 PM No comments:

Email ThisBlogThis!Share to TwitterShare to FacebookShare to Pinterest
Labels: shoes 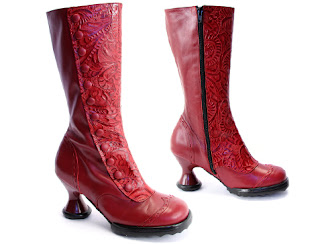 Don't you think these boots would go GREAT with that red wig?

And while I'm at it, how about these boots? 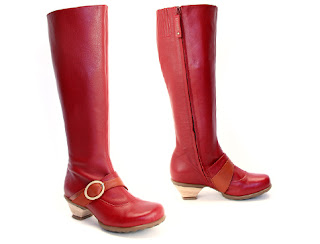 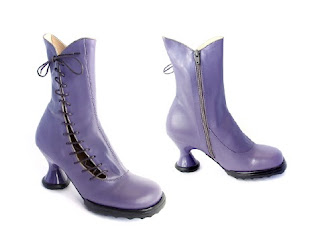 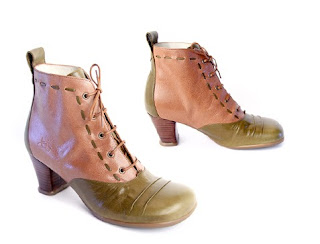 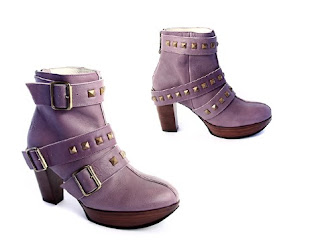 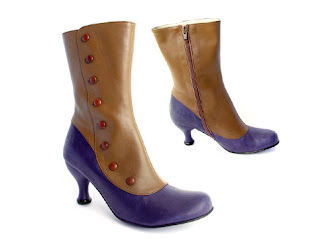 All from John Fluevog.

P.S., the weather outside is frightful.  Just the way I like it.
Posted by Unknown at 12:21 PM No comments:

I don't know why but I'm all about RED these days.  It started before the holidays so it's not just some Christmas thing.  RED RED RED RED RED!!!!!

Michaela sent me this picture of a wig you can get on etsy.com: 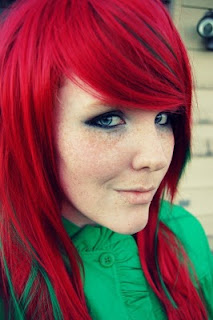 so naturally I went to their etsy shop.  Which wig don't I want?  I have something like seven wigs favorited right now.  I kind of feel like wigs are as good as knit hats in the winter time and if you wear a wig and a hat you're extra warm, right?  I always wear a hat indoors this time of year (since it's buttass cold) so these would be practical.

I'm thinking I do better when I'm thwarted.  When things start going my way I get all big headed.  I think "At last, The Universe is on my team!  Everything's going to go great now!"  Then I start pontificating and condescending and acting all giddy and more foolish than usual.  Later I get home and realize what a dolt I've been and I feel so embarrassed.  As you can tell, I've done this more than once.  I should be grateful for the indifference life usually dishes out.  I can't seem to control my unmerited self-confidence when things seem sunny.

Speaking of lack of control, I have become obsessed with lipstick.  I picked up this boxed set at Anthropologie the other day: 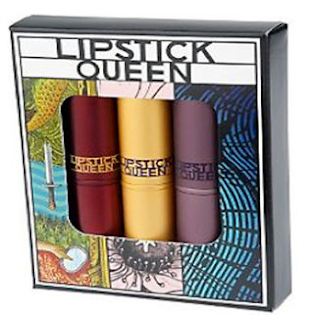 I've tried all three tubes.  They are the finest lipsticks I've ever worn.  The colors are beautiful and flattering and they feel luxurious on - very hydrating, not sticky or waxy - and they are without odor or flavor.  They were sheerer than they looked in the tube which works for me.  These are colors I can put on without having to look in the mirror and yet they still have impact.
Once I'd tried them all I immediately googled "Lipstick Queen."  It's Poppy King's new lipstick company.  Maybe you remember her perfect matte lipsticks from back in the 90's?  Maybe not.  I'm just the kind of person who remembers stuff like that.
Here's a link to the website.  I want to try the "Black Tie Optional" and something from the Sinner line. 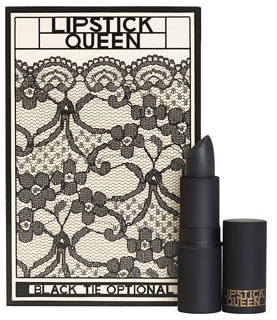 As for the Kate Spade red lipstick I mentioned earlier, it turns out you can buy it on line.  It's under "fragrance" (and yet it too has no fragrance or flavor)

Finally, I bought a Santa hat for Fay.  Yes, I'm one of those people now.  Somehow I managed to pass up the banana split dog costume they were selling at Target this Halloween (the one that's all over youtube) but the Petco Santa hat got me (after all these years!)

Maybe I'll change the photos over there on the right to something more seasonal.  They've been up there since 2007.

It's funny, I just typed in the title of this post and it made me think if the times I've claimed to be on a rampage.  Usually that involves something like eating popcorn and Nutella or tidying the house or (God help me) staying in bed longer than usual.  These are not rampages.  Rampages involve violent uncontrollable behavior. When I think about it, the things I consider "out of control" for me are ridiculous.  I'm not sure I've ever really been out of control (on my own initiative) in my life.  I feel like I'm missing out.  But then I think of the people I know who really are out of control.  It's pretty much been fatal for them.  Is there such thing as being a little bit out of control for a little while?
Posted by Unknown at 7:49 PM 5 comments:

I was looking at what I'd written under the "monsters" category.  The older stuff is a little bit interesting.  I really hope I can make a comeback here sometime soon.  That would require me to have some time to think and maybe the holiday season isn't the best hope for that.

Clearly I need to make some lifestyle changes.

Everybody else just deals differently than me.  Plenty of people out there are dropping balls all the time.  I just don't see it.  The streets are awash with dropped balls and they're not all mine.  There are tons of things I'm terrible about.  There are all kinds of people who are better about them than I am.  But there are probably other things that I'm better about than they are too.

Wow, what am I, fourteen?

Maybe I should get back into reading the "New Yorker" more again.  At least the comics.
Posted by Unknown at 12:44 AM 2 comments: