A Couple Of Recent Photos 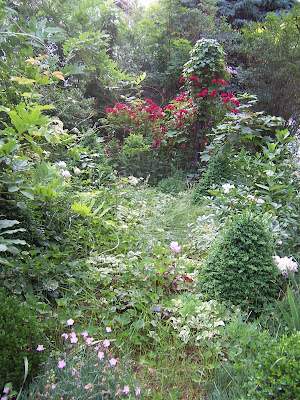 My garden in Brookline. It looks rather magical from here so this is the photo you're getting. 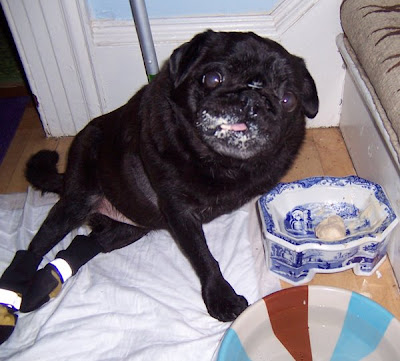 Fay enjoying some Frosty Paws on a hot day.
Posted by Unknown at 9:36 PM No comments:

I Use A Super Power

After seven years I think I've twigged to the reason I find running so meditative: when I run I concentrate heavily on my breathing and I use the yoga breath I learned from Alan Finger on my Yoga Zone video.

The tensest moment from today's run was when I came out of a cross street. Converging on me from one direction was a pregnant woman with her husband pushing a stroller. From the other a woman with a double-wide stroller. There was oncoming traffic in both directions in the street. Using the time-shifting abilities I got on Facebook I let the traffic pass then whisked myself accross the street to an empty sidewalk. It was tight. I don't know how the two families got past each other. I didn't hear a crash though.
Posted by Unknown at 11:45 AM 1 comment:

The longer I go without writing about PotLuckCon (still not so happy with that name but I can't think of a better one - not that that's my job) the less likely it is that I will write about it. So here are some more thoughts or things I noticed:

Almost everybody at the conference had an iPhone. It makes sense. These folks live for gear.

In reference to my last post about the modesty of recording engineers, I talked to so many people who clearly had no idea how interesting and accomplished they are. I guess that's sort of a good thing. People who think they're big shots can be insufferable. But then maybe those people are just faking. Maybe if you know you're important you don't have to go lording it over everybody. Anyway, modesty didn't prevent those engineers from talking to their heroes or otherwise socializing as far as I could tell.

The Sheraton was a fine place to stay. The lobby was achitecturally strange but not uncomfortable. That's the closest thing I have to a complaint about the Sheraton. The views from the hotel were definitely better than at the Fairmont. In fact, Pete and I could see the Fairmont and its (empty) pool from our room. The bar at the Fairmont was better but possibly more expensive.

If you stick to the French Quarter things seem pretty much back to normal in New Orleans. It might be a little less crowded now. Also, when you get to talking with the oyster shucker behind the bar or your taxi driver they all tell you emphatically how much they LOVE living in New Orleans in such a way that you know they went through hell to be there and they couldn't be more serious. They may tell you how they got through Katrina or they may not but it's always at least a subtext. I didn't know whether to ask or not so I kept my mouth shut.

To me as an outsider, Katrina has left another layer of grim beauty on New Orleans, already a place with a complex history and feeling. Obviously there's so much more to it than that. Katrina was nothing but a tragedy. Everybody knows people died, neighborhoods are destroyed, probably thousands of other people won't be coming back. The beauty part is the determination of the people who are committed to the city and the lives they love. They work moment by moment to grab ahold of the place and keep it there for the future. They have restored the fantastic bands playing in the street and the amazing food and the "life is a pain in the ass but lets enjoy the hell out of it if we can" attitude. They keep going. They're heroic.

Most of my favorite places to go were still there, like Felix's Oyster House, Cafe Du Monde and my favorite wig store, Fifi Mahony's. I contributed to the economy a bit - I bought three wigs. I'm sure you'll see them here later. I would have contributed more if I'd had time to go to the yarn store.

Another great place to go if you're headed for New Orleans is the Ernie K-Doe Mother-In-Law Lounge. It feels like the real thing and they have a great oudoor space to enjoy a New Orleans summer night. Take a cab. On the way you will see hundreds of people living in a tent city under the freeway.

Those were the burning issues I wanted to cover. Something else might pop up later, maybe when my new wigs appear.
Posted by Unknown at 2:59 PM No comments:

There's so much I want to say about the PotLuck/TapeOp trip but I won't do it all at once.

As always I had a wonderful time with the Tape Oppers at PotluckCon. Every year I meet a bunch of interesting new people and enjoy getting to know the people I met during previous conferences better.

I've mentioned before that I'm not so good at socializing or meeting people I really connect with. Well these conferences are a really easy way for me to do just that. The folks who go are intelligent, funny, approachable and easy to talk to, passionate about their work and yet also interested in other things that are happening in the world. Yeah, there's a lot of technical and gear talk going on but these are people whose business is creativity and who have had to craft their lives unconventionally to accomodate what they want to do. Music isn't my business but we do have shared experience. It's definitely a highlight of my year to be in such a large group of people who either think kind of like I do or blow me away with how their brains work.

If you idolize an indie-rock music producer or recording engineer do not hesitate to go talk to them. The vast majority of them are incredibly modest and happy to talk to anyone about what they do. Ask them anything. Except "what was it like to work with Nirvana?" or whatever their big band is if they have one. They're funny in that they can totally idolize each other and yet have no concept of how they themselves are idolized in return.

That's all I have time for now. I hope I get back to the topic because I learned a lot of interesting (well, to me) things this year. And then there's the whole New Orleans experience to get into. You know how life is though: it keeps coming at you.
Posted by Unknown at 11:38 AM 2 comments:

We're off to New Orleans tomorrow for PotLuckCon, the continuation of TapeOpCon.

I was just looking at the web page for the Sheraton where the conference will be held this year. It's a little daunting. Just a little. We used to stay at the Fairmont a few blocks up Canal Street during the pre-Katrina Tape Op days. It's not in operation now. That place had character to spare. I believe I will miss it. I hope the Sheraton's not too corporate in comparison.

Well, I'd better go finish packing since it's almost midnight and our flight leaves at 8 AM. Classic me.
Posted by Unknown at 11:22 PM No comments:

Pete's got a band, The Weisstronauts. Their newest album, "Instrotainment," just came out. Here's where you can read a review of the album and an interview with Pete.
Posted by Unknown at 10:16 AM No comments:

Email ThisBlogThis!Share to TwitterShare to FacebookShare to Pinterest
Labels: music

I drove down to Brookline today in hopes of digging up more antibiotics for Fay.

On the way I decided to really try to drive no faster than 55 mph as much as possible. Routes 12 and 140 were no problem but Route 2 can be dangerous. Most people go about 65-70 on Route 2 even though the speed limit gets down to 45 in some places. Then there's Route 128 encircling Boston. People go 60 to 80 on 128. In the breakdown lanes.

I have tried going 55 other times and been forced to give up because at that speed I was more of an obstruction than just someone going in the slow lane. Today though, with gas at around $4 a gallon, I had some company on the right side of the road.

I was thinking going 55 is kind of the driving equivalent of becoming veg for me: I love driving fast and the taste of bacon but I'm giving up both for the greater good. Ha!

Again, what pathetic vices I have. Speed, bacon and shoes. At least I still have the shoes.
Posted by Unknown at 4:10 PM No comments:

I just realized something. The people I can think of that have or have had Nellies are kind of users. I don't mean drug users in this case (although they are often that too) I mean they use people. They feel completely okay about letting someone else do all the stuff they'd rather not do themselves. I feel weak and guilty doing that. I feel like I really ought to be able to do all that stuff for myself. Maybe I'd feel differently though if someone offered to take it on.
Posted by Unknown at 9:52 PM No comments:

Email ThisBlogThis!Share to TwitterShare to FacebookShare to Pinterest
Labels: Dealing

I Don't Want To Be A Responsible Adult II: Where Do I Go To Get A Nellie?

Sub-sub title: Is There Any Way That I Can Shirk Any More Responsibilities Than I Already Do?

Thelonius Monk had Nellie to do all his dirty work for him. Maybe I have to be more of a genius to get one. Or maybe I need to be more incompetent.

I'm thinking of the creative people who are pretty much incompetent in other areas of their life who somehow manage to attract the devotion of someone who will take care of all that for them. "Creative" gets to do their work and socialize and have fun while "Devoted" pays the bills and sees to the housework and advocates for Creative out in the world.

The curse of not being bent enough: I have to do everything for myself (or else let some stuff slide!)

Then again there are those people who can't get it together and haven't lucked into a Devoted who end up making drunken, accusatory phone calls at three o'clock in the morning to the few friends they have left from a motel in the middle of nowhere on their way to rehab.

Maybe I should just be grateful for what I have.
Posted by Unknown at 10:21 AM No comments:

Email ThisBlogThis!Share to TwitterShare to FacebookShare to Pinterest
Labels: Dealing

The server that hosts my website, melzeppelin.com, and provides my e-mail has gone down. It's a good thing I was too lazy to look up my server password when I set this blog up. At least I can communicate this way with the two or three people who read this and also send me e-mail.

I am just on fire with fascinating blog posts these days.
Posted by Unknown at 11:27 AM 1 comment: