Okay, now you guys are going to know how nuts I am: I don't care if I get eaten.*

After I'm dead I really don't care what happens to my body.  If someone wants to eat me I'm fine with that. Just for God's sake make sure I'm prepared properly!

I've had a couple of meals in my life where I've thought, "you know, if someone was going to eat me I'd want it to be this way."  I actually told one of the chefs that if I was going to be cooked after I died I wanted him to do it.  I think I weirded him out.  Do you know any chefs?  It's not easy to weird them out.

Tonight Pete and I went to the Highland Kitchen.  One of the things we ordered was the Pig and Pickle plate.  I believe that the crispy confit changed my life.  To me they looked more like deep fried pancetta - thick chips of bacony pork, crispy as all get-out.  Smoky, salty, rich but not greasy or overwhelming.  Holy cow!  To me that's respect: cooked pig perfected.

If someone wants to eat me after I die that's fine with me, as long as I'm FRIGGIN' DELICIOUS!

*I am not so weird that I want to be eaten alive or that I would choose to be killed for food.  I'm sure that many of you (perhaps all three of you) who read this blog feel similarly when you think about it.  Once you're dead you're probably not going to care about anything at all.  Also, there are plenty of weirder things about me than this.
Posted by Unknown at 11:19 PM No comments:

Last night Pete and I ran into an older guy who he hadn't seen in a while.  Pete asked the guy how his summer was and the guy said "perfect."

So maybe I'm not my usual, effervescent self and that feeling of joy is harder to come by and doesn't stick around as long.  Time will bring those things back to me.  Right?

Maybe next year I'll have a perfect summer.  Not that I like summer.  But anything's possible.
Posted by Unknown at 6:22 AM 2 comments:

Well, it's almost November and you know what that means: NaBloPoMo.  This year it also means NaNoWriMo.  I'm going writing bonkers!

I'm really excited about writing the novel.  My plan is to write whatever the hell comes out - any goddamned thing.  I'm looking for a wild, bumpy ride.  That will probably work for two days and on day three I'll have nothing going on and think "what the hell did I get myself into?" and there I'll be.

I've been reading Stephen King's On Writing and enjoying it very much.  Yesterday I was very pleased and relieved to discover that he feels it's unwise to begin with a plot in mind.  I don't think I've ever written anything with a plot.  I'm a short story girl as far as writing goes.  It's easy to get away without a plot with those.  I certainly don't have a plot in mind now.  Characters yes, plot no.

Of course he does suggest you start with a situation as well as characters.  Hopefully a situation will come to me.

I'm having all these elaborate fantasies of coming up with something really amazing.  This project will be the magic bullet that will expose my awesome insides to The World and all kinds of interesting people will find that they want me to be their new best friend.  Yeah!  I think that with every project I start.  I also think I'll win the lottery.
Posted by Unknown at 9:22 AM 3 comments: 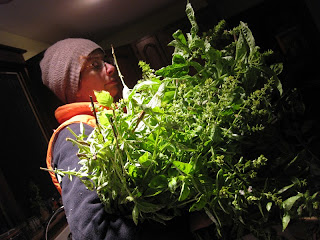 Harvested a bit of basil last night.  I guess I'll be making pesto later today.
Posted by Unknown at 11:49 AM No comments:

For starters, let me just say that I was doing some serious weeding today and when I was done I thought an after-gardening martini would be a good idea.  At the moment I'm done with the martini and I could probably use some food.  So that's where my head is.

Speaking of food, I thought I'd relate my first experience with kimchi.  I <3 KIMCHI SOOOO MUCH!!!!!!!

It was back in 19 (yes, last century) 1989.  I was working at an animation company (why the HELL did I leave???  Oh yeah, they weren't paying me*) called Olive Jar.  Yes, it was super-fun.  It was also kinda freaky because I had just moved to Boston and I was unfamiliar with the Boston attitude.  Let's just say that some people could be moody and I thought it was me when it was really them.

At lunchtime this guy, A.J., the DP (Director of Photography, or cinematographer) had a jar of kimchi.  We ate family style at Olive Jar.  Isn't that cool?  I also had my first quinoa there.  Anyhoo, the smell of the kimchi really intrigued me.  A.J. was a friendly guy so he let me have some.

Holy crap!  All I wanted was more kimchi!!!!  It was really obvious and I think it amused him.  I probably could have eaten the whole jar but I held myself back.  It was difficult though.  I had kimchi in my soul.

Okay, now I'm going to track down some dinner for myself.  My martini thinks it would be a good idea if I had a hot dog with kimchi on it and some spicy mac 'n' cheese.

Please be assured I will also make some nice, healthy vegetables too.  Probably steamed broccoli.

*And it's a good thing too - I was incompetent.
Posted by Unknown at 6:39 PM No comments: