I'm going to be running in the Disney Princess Half Marathon tomorrow so here I am at Disney at the Pop Century resort having this breakfast: 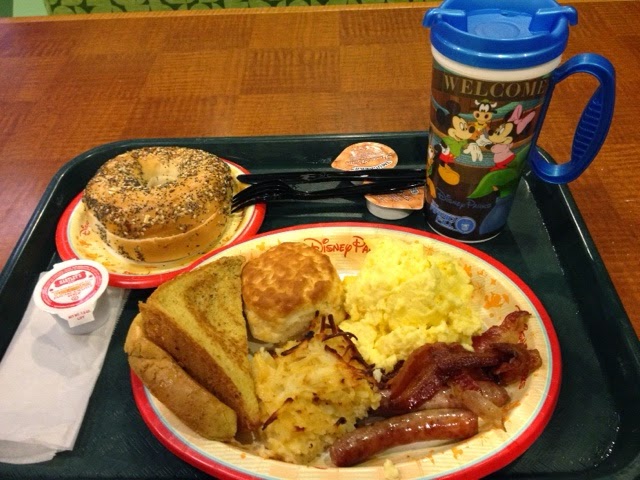 There's no way I'm going to eat all of that. The bagel's for tomorrow (when we have to get up in time to catch a 3:30 bus to get in place for a 5 AM start). I got this breakfast because I really wanted the biscuit and this was the only way. I wanted the eggs and bacon too - and I wouldn't say no to French toast.

Pete and I are here with my high-school friend, Kirsten, and her husband, Ben. It was Kirsten's idea to do this. She suggested it to me back in July when I was visiting down in D.C. I'd never imagined I'd do anything with the word "marathon" in it but it sounded fun and here I am. It has been fun, and very interesting, to train for this. More on that later.

For now, here we are at Disney World for the first time. It's wild here. In a way it's kind of like Vegas. Last night, inexplicably, we took a boat to Downtown Disney.

Disney's a whole other series of posts. You can't just call up, get a hotel room and come on down. There are Magic Bands and photo plans and Fast Passes and reservations and a whole bunch of research-ahead preparations to make that they keep e-mailing you about. I made as few as possible because I HAVE A LOT OF OTHER STUFF I HAVE TO DO just like most people. It's really as if you needs preliminary trip to Disney so you can plan your trip to Disney.

Now that we're here it turns out to be even HUGER than I'd ever imagined.

My plan for today is to head over to the Expo Center and pick up a bunch of pink sparkly swag then go on some rides I guess. Tomorrow I'll be running 13.1 miles dressed like a big, tall swig of sparkly Pepto Bismol - assuming there are no hiccups.

Watch this space?
Posted by Unknown at 7:37 AM No comments: