My mother-in-law (a very fun woman) gave me the Acacia catalog last time we were visiting my in-laws in Florida. It's mostly yoga clothes, Aisianesque home decor items and alternative-y work out dvds (I'm not at all sure how my mother-in-law got on their mailing list)
That is where I discovered hooping. Hooping, it turns out, is kind of a thing. Did you know? I didn't. Hoopnotica is featured in the Acacia catalog. In my area there's Boston Hoop Troop. Maybe I'll take some classes with them. Good hoopers are hypnotic.
It looked fun so I ordered the instructional dvds and a travel hoop. Turns out it is fun. I love it! Every morning I wake up psyched that I can hoop today (unless it's raining) I'm not good at it yet but I'm feeling determined.
Below you can see Pete's hooping debut. I already posted mine on Facebook.
He's got kind of a horsey-riding style.
Posted by Unknown at 7:36 PM 3 comments: 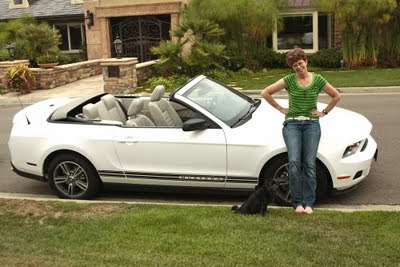 Here it is, the Mustang I rented when I was visiting my parents earlier this month. I shouldn't say I fell in love with it. It was more of an infatuation. I was really sad to see it go when I dropped it back off at Hertz. I had a TON of fun driving that car.
Posted by Unknown at 4:05 PM 1 comment:

Ms. Observant just noticed that she never posted one word about the closing on her house.
I'll tell you right now we were a little bit sad but overwhelmingly relieved. It was a great house and we loved living there. Now we don't live there and that's completely okay. It's not even a little bit weird, possibly because we still haven't had time to think about it too much.
If we go on like this we might not ever think it's weird!
One thing I may have learned (you know how slippery lessons can be) is that I don't want to live in a big house again. I'd live in a sort-of big house as long as I could afford to have someone else come and clean it regularly.
Since we still have Vermont (with a clogged sink in the bathroom upstairs among other things) we still have maintenance issues and plenty of them. But maybe we've cut them in half. We no longer have tenants and that's a load off.
Of course you can't shirk all of life's hassles. Then you'd be dead - or as good as. I can dream though.
My dream: Making making making all day long, only stopping to eat, have fun with interesting people, play with my dog, go swimming in the ocean (or have a snowball fight or something) read a book, learn some languages, garden, meet more interesting people, daydream, nap...okay, there'd be a fair amount of stopping. Let's call it fifty-fifty, making plus activities.
Enough daydreaming. Time to strategize for the future! (And eat a piece of apple pie)
Posted by Unknown at 3:21 PM No comments:

Sorry About The Gap

Wow, it's been over a month since I last posted. Sorry about that. Here's a post for today. I can't swear that this marks the start of a posting roll though.
All of us east coasters (Pete, Fay and I) are back from CA. Dad's surgery went well though we haven't received the biopsy results yet. We even managed to have some fun.
Mom and I did some shopping and went to the beach. Dad took us all to the hang glider/parasailing launch point near the Salk Institute. The young 'uns went to the Whaling Bar more than once. 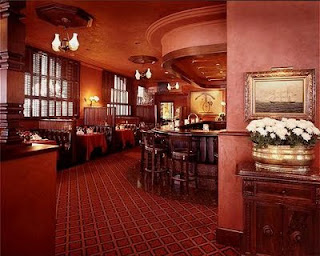 Here's a not very informative photo of the Whaling Bar. In real life to the right of the white flowers in the picture is another room the mirror image of the one you can see only it's all dining room, no bar. That room has a fireplace flanked by life-sized ceramic leopards.
Don't let me forget Mr. Taco! I went there at least three times.
I also fell in love with a car. I never thought it would happen to me. Pete took some pictures which I hope to post soon.
Fay even had a good time mooching off of extra people and terrorizing her doggie cousins (my brother and Sarah's dogs) John is an Australian Cattle Dog and Atlas is a Golden Retriever. If there was food around Fay would try to kill them. Fortunately for her they were very nice and ran away from her. They were terrified of her.
The only reason I can think of for their fear of her is that they have no clue in hell what she is - I mean, she's a fraction of their size. Sometimes she has wheels, sometimes she drags herself around at top speed like a seal. She's incontinent and on so much medication I imagine she smells really weird to them. Plus she's crazy fierce - like a lunatic. That's got to be intimidating. She's also unpredictable: most of the time she's peaceful and friendly. I don't think they clued in to the fact that she was only homicidal around food. I just wish I'd got some video (it's not video, it's not "footage," what is it - a movie?) of her in action for her neurologist who would have been very proud of her.
I'm sure I've mentioned this before but California always weirds me out. Maybe it's my own sense of unworthiness, like I think this place is too beautiful for me to ever belong there. I don't know, it's beautiful but it's awfully built up and paved. Maybe it's just that the topography and climate are so unlike what is familiar to me. I just feel when I'm there that nothing is real.
I wonder if I put extra pressure on California because I think I'll probably live there one day? I didn't think any of those things about other places like Santorini or Ireland or Rome or St. Lucia or Vero Beach. Well I'm not going to figure it out tonight.
So now that our major events of the first half of 2009 are over - the house is gone and I'm back from California - well, now what's going to happen? Now what am I going to do?
Posted by Unknown at 8:17 PM No comments: