Mom and I have been to the clam bar twice since I last posted. Neither time did I remember to bring a camera with me (not even my phone) so no clam photos. My apologies for failing you as a blogger in this area.

We continue to clear out the beach house for rental in August. I had planned to come out here by myself this week and take care of it but Mom offered to come along.  Thank God she did because it would have really sucked to have to do this alone. I must say that we've done a very good job. We celebrated our triumphs with rum and tonics on the deck tonight (before getting lobster rolls for dinner at the clam bar) I didn't think rum and tonic sounded very appetizing but it turns out to be quite delicious.

Fay is also having a good time. She enjoys running around the yard chasing cars and barking at them. I should probably get some video of this. She likes to be outside here more than she does in Vermont because the lawn here is far more sumptuous and there are far fewer black flies. In fact, there are no black flies. They do have very sneaky mosquitos here though.

Today it was very foggy when I awoke. After breakfast I walked down to the beach and it began to rain. You might think "well that sounds gloomy and unpleasant." It turns out that that was just the atmosphere I've been missing.  I love the ocean but I've been feeling unable to connect with it the last several times I've had the good fortune to see it. I may have just needed to be alone with it.

The beach was pretty deserted today, I'll tell you. It felt so good to put my feet in the water and watch the waves crash and foam and see the light change and the clouds race by and to be pelted gently with rain. Since no one was talking to me or otherwise requiring my attention I could take the time to sound out my feelings, to actually feel them. So luxurious. Of course, then the rain picked up. It was cool though, I had an umbrella.

Later in the day the sun came out and Mom and I kicked butt on the list of chores we'd drawn up. All in all I'd say it was a very satisfying day.

Okay, so the plan for tomorrow: get video of Fay chasing cars. I think I can do that.
Posted by Unknown at 10:49 PM 2 comments: 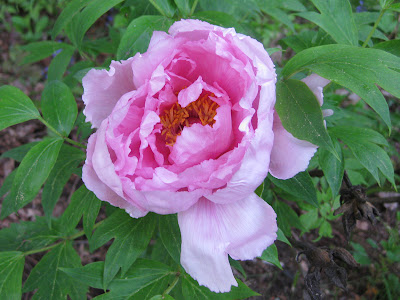 I was home to see (and smell) the tree peony bloom! 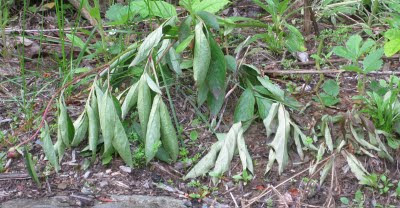 Ants have taken down this herbaceous peony by living in its roots :( The view on the way to dinner was spectacular though :)
Yesterday I accomplished my goal of getting all the roses and strawberries planted. Whew! Go me! Then Pete took me out for nachos and beer. It was great!
Now I am traveling again. Hopefully tomorrow I can post photos of the fried clams I hope to devour.
Posted by Unknown at 6:43 PM 2 comments:

My Lexicon Of Rocks And How To Dig Them

I'm a little over half-way through planting all those roses. I absolutely have to finish planting them today but at the moment it's way too hot outside. Instead I will tell you all about the rocks I routinely dig up. 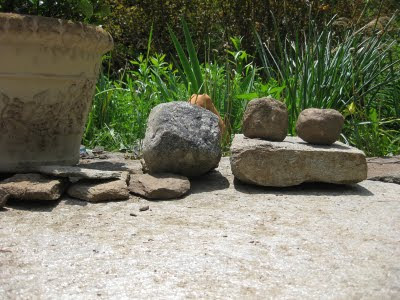 They are called, from left to right, top to bottom, flats, heads, potatoes and bibles.
Obviously, when you're gardening you have to dig holes in which to put your plants. Small plants need smaller holes, larger plants need larger holes. The roses I ordered turned out to be extremely high quality and as such have massive roots and require really deep holes. To plant them perfectly, with their roots un-bent and their bud unions* four inches under the soil line, I'd have to dig a hole about three feet deep. 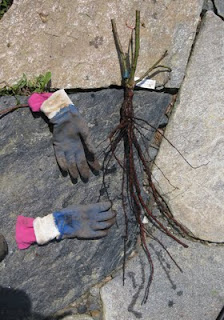 As everyone who had to take U.S. history knows, the soil in New England is rocky. When I first started gardening I was lucky enough to try to purchase my first garden spade from a kindly shop keeper who was an experienced New England gardener. He steered me to the garden fork instead. It's much easier to tell what's dirt and what's rock when you're using tines instead of a single blade. When you hit a rock, the tines that hit dirt will keep going into the ground when a blade would just stop. That makes it much easier to find the edges of the rock(s) you just dug into than if you were using a spade.
The most common rocks are the flats. They're okay as long as they're not too big.  Flats are fairly light and easy to dig out and they can be useful around the garden for marking paths and propping up pots. The down side of a big flat is that you end up digging up a much broader hole than you might have planned to dig to get around them. They can also be a hassle if they extend under an established plant.
Potatoes are the next most common and the easiest to dig up since your fork slides around their sides and you can get under them easily. They are also good for marking paths.

Heads are a mixed bag. On the one hand they're big and really heavy. It's hard to find their edges and hard to get under them. Sometimes when you do get under them they just spin in the hole instead of coming out of the ground. On the other hand, once you do get them out of the hole much of your hole is already dug for you! Also, digging up a head can feel like a nice accomplishment. Of course sometimes you end up not being able to get them out. Yesterday I had to abandon a place where I was going to install a group of three rose bushes because I couldn't get the head out of one of the holes. Of course it was the third hole and I'd already dug out the first two. That was disappointing. I haven't figured out what to do with heads other than use them as little points of interest among the plants.

Last fall I dug up my first bible. Bibles are my least favorite rock to come across. They seem to be flats at first so you're psyched because you think "oh that'll be out in no time" but then you can't seem to get under them. They have the broad surface area of a flat so you have the nuisance of having to dig a wider hole but they're heavier than a flat and they go much deeper. Plus, finding a head sounds so much more gruesome than finding a bible. Bibles are no fun.

I should say that bibles are my second-to-least favorite rock to come across. The real worst kind of rock to come across when you're trying to dig a hole is ledge. Ledge isn't going anywhere. You hit ledge and that plant is going to have to go somewhere else.

When you're gardening it's generally a good idea to start by planting the larger plants and then fill in the smaller ones. That way you're less likely to accidentally dig up or step on something you wish you hadn't.

If you're working with an established garden, like I am here, you tend to end up trying to fit things in between plants of all sizes that have been growing there successfully for years. It can be difficult to find large enough spaces in which to put things like monster, high-quality bare-root roses. Sometimes You'll find a space that's just the right size and start your digging. Then you discover that nothing is growing in that space because there's a huge rock there. You have to start over and re-think and try to discover another place to put your plant.

I tell myself that if I were a good gardener I'd make a plan and stick to it instead of just buying whatever pretty thing catches my eye whenever I feel like it. The truth is that you can't know for sure where you're going to be able to plant something until you've got the hole dug. Maybe my gardening life would be more reasonable if I stuck to a plan but even then there are no guarantees.

*The bud union is where the top of a less-hardy rose is grafted to the roots of a stronger rose, making the less hardy rose more likely to survive where it wouldn't using it's own roots. Aaaaa! It's a Frankenstein!!! That graft point is probably the most vulnerable spot on the rose plant and needs to be buried in most areas of New England for its own protection. Bury the Frankenstein!!!!
Posted by Unknown at 1:31 PM 4 comments:

Why I'm Nervous About Today 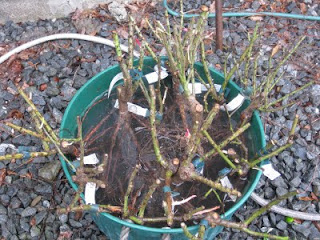 Roses don't generally seem to do all that well in this garden. Is it too wet? Too shady? Too cold? Is there too much competition? Voles? I don't know, and yet here I go trying again in a big way.

Every year I think "this year I'll do better. This year I'll get the mulching done and I'll do a better job of the weeding." Well maybe this is the year. You never know.

Not only do I have to figure out where to put them but I also have to put them there today. So I'd better get cracking!

Fortunately I had a good breakfast featuring home-made bread, a fried egg and this: 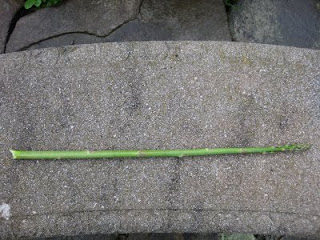 Posted by Unknown at 8:08 AM No comments:

It has been brought to my attention (hi Alex!) that I haven't posted in a while. Life keeps whizzing on by and I haven't had a lot of time to myself to think about things. That's my excuse.


For example, I met a celebrity: 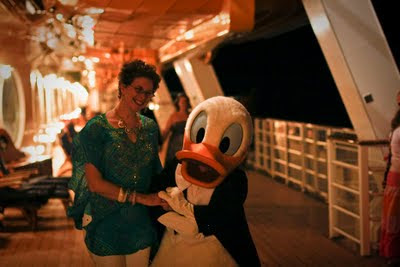 I know he seems ornery in his films but keep in mind, he is an actor. In person he's quite charming.
Posted by Unknown at 12:55 PM 3 comments: