I have been a very bad blogger. So bad that I hesitate to even call myself a blogger. That said, I couldn't go to bed without reporting two funny city incidents that occurred today.

Later in the day I was in something of an industrial no-man's-land, crossing a bridge over some railroad tracks and headed under route 93. I was on my own and a man was approaching from the opposite direction. He stopped me and asked me if I'd button his shirt cuff for him. He said he'd been trying and trying to do it himself with one hand but he just couldn't get it. He put his arm out and I tried to button the button. I said "I'm having a hard time and I'm using both hands!" Finally I got it. He said thank you and moved on. He was a smily, raspy-voiced guy with a diamond pinky ring. I wondered if he was a mobster or something. Probably just a regular guy on his way to a decent lunch with a perfectly innocent buttoning issue. I very much enjoyed the encounter.

Now I feel like I'm on a little bit of a roll so I'll add two recent photos: 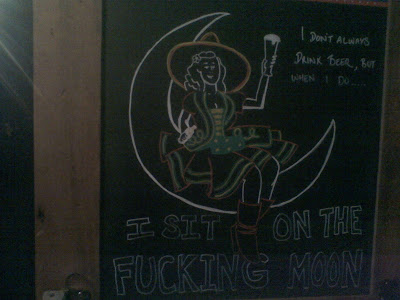 A sign I was delighted to spot in Bukowski's in Boston. There's a Bukowski's in Cambridge as well but this is from Boston. I want to drink beer while sitting on the fucking moon. I also want to wear that hat. 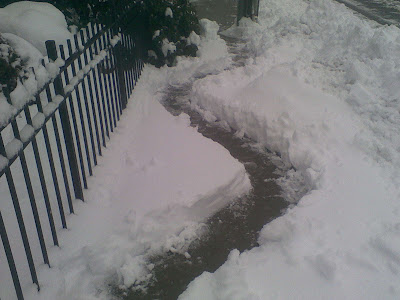 We've had quite a bit of snow in the Boston area this winter. Shovel fatigue has set in. The person who shoveled this walk seems to have been a bit punchy. Definitely not a regulation job - this isn't wheelchair friendly. I found it entertaining though.

Oh I have more of these amusing city incidents. Just not tonight. It's bedtime now.
Posted by Unknown at 11:47 PM 3 comments: