I couldn't wake up today.  Again.  I'm starting to wonder if I have Lyme Disease or anemia or something.

A good thing I have right now is an excellent view of a juvenile robin.  It's sitting on a branch outside my window.  Its mom came and give it some lunch a couple of minutes ago.  Now it's taking a nap with its little beak tucked into its wing.

Oh - there - it woke up and did a little stretch.  And settled back in to nap position.  Now a motorcycle went by and woke it up again.  Oh - and here comes Mom with some  more lunch.  Yay Mom!
Posted by Unknown at 2:18 PM No comments:

This Is Ready Though 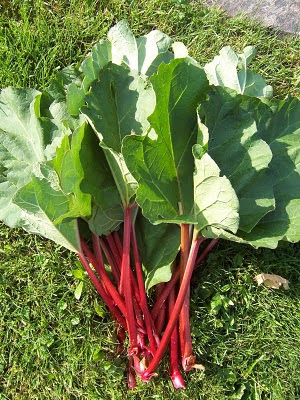 Rhubarb Crisp!
At least, what's left of it. 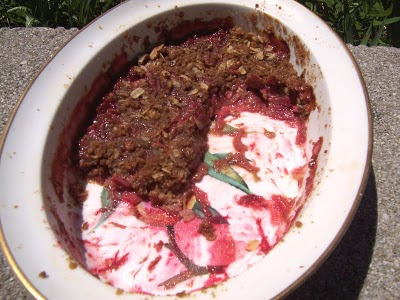 Not So Far Along

I'm a bit cheesed-off at my garden right now because I think it should be farther along than it is.

I have to keep reminding myself that it's still spring.
Posted by Unknown at 11:21 AM 3 comments:

Just checking my blog to see if I posted anything new...

Email ThisBlogThis!Share to TwitterShare to FacebookShare to Pinterest
Labels: posting

In other news (which nobody but me cares about) I was feeling a bit over-padded so I'm doing the South Beach Diet.

A Cool Thing In The Garden

Look at what my cherry tree is doing: 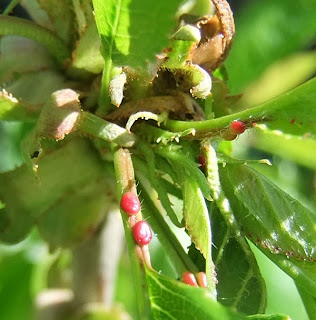 Naturally I googled "red nodules on cherry leaves" and I found out what it is, courtesy of "Ant Man" (page down in the comments):


"Cherries generally have glands on their petioles. They secret nectar that attracts ants. Studies on various plants that have similar glands (like passionflower vines) indicate that the ants help the plant by killing and otherwise interfering with insects that would otherwise eat the plant. Sort of like the plant paying "protection" money to the ants.

Also, as another poster indicates, ants often farm aphids as well for honeydew. The cherry tree's strategy is to provide nectar directly to the ants, removing the "incentive" for ants to farm aphids, This way the cherry tree avoids the damage by the aphids that ants would otherwise protect." 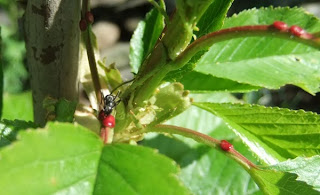 It's working!  I think that is so cool.
Posted by Unknown at 9:59 AM No comments:

Back on April 30th I finally got a chance to deal with some of the butterfly bushes I ordered in March.

I rarely do before and after pictures of anything because I'm so embarrassed by the state of the before in the picture that I don't want to show anybody what it was like, I just want to fix it.  It is nice, though, to have evidence of how far you've come I guess.  So this time I thought I'd go for it.

Unfortunately all the batteries in all the cameras were dead.  Fortunately my Flip

camera was all charged up.  So below you can view digital evidence of half-assed gardening in action:

If I were a fully-assed gardener I would have planned ahead and prepared this bed a year ago.  Since that's now how I roll - I'm all about impulse plant purchases - I have to make it up as I go along.  The landscaping fabric plus mulch might smother the weeds beneath them but it might not.  If not, then the weeds could all make a beeline for the holes in the fabric around the plants and be even more competition for the poor little nursery-grown darlings.  So this is an experiment.
Posted by Unknown at 3:40 PM 2 comments:

I just want to point out that four days ago it was snowing.  Yesterday and today it's in the eighties out and really humid.

I think the weather is trying to kill us.

Fay refuses to go outside just like she does when it's pouring rain.  She's not stupid.
Posted by Unknown at 4:29 PM No comments: