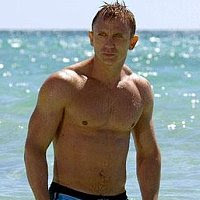 Instead of worrying about what someone else might be doing concentrate on your own stuff.  That way what you want to do is more likely to get done.
Being informed is helpful.  Being misinformed is dangerous and unnecessary.  Especially when there are easy sources of good information:  snopes.com and wikipedia.  It has never been easier to see if something is worth worrying about or not.
What you look for in this world is what you find.  I suggest looking for something good.
Posted by Unknown at 9:31 AM 1 comment:

Email ThisBlogThis!Share to TwitterShare to FacebookShare to Pinterest
Labels: foolishness

I can't seem to stop cooking.
I keep looking at the list of things I want to do and I know it's too long.  I can't get all that stuff done.  So I thought I'd try to cut back on my cooking.  You know, cook once or twice a week - enough stuff so that the rest of the week I could just grab something and heat/eat it?
It's not happening.  For example today I made yama imo salad.  Only now that I googled yama imos (a kind of Japanese yam) I find that I made satsuma imo salad.  Not traditional but still very tasty.  The salad involves cutting a raw yam into julienne strips, soaking the strips in a vinegar and sake marinade then draining them and serving them in a different vinegar, sake and sugar marinade and garnishing with slivers of lime zest.  Did I get out my mandoline to cut the potato up?  Hell no!  I did it by hand.  It took a while.  I enjoyed it too!
I found the yams at Whole Foods.  The sign said "Japanese Yams."  There are a lot of different Japanese yams.  The sign could have been more informative.
I'm starting to go off on a tangent about Japanese yams.  I should stop.
The point is I like fresh food and I like cooking.  Plus cooking gives you a quick payoff.  You get the satisfaction of using your hands and your head to make something good and then you get to eat it.  Often the rewards arrive in under an hour.  Much more immediate than when making art.  Also more ephemeral.
So I'm finding it hard to save myself time by cooking less.  Maybe I don't value time as much as I value doing whatever I damn well please?  I'm having a bit of trouble pinpointing exactly what it is that I value over time.
Maybe it's not so much that I don't value time but that I'm using it to do things that might be less important to me in the long run than other things I could be doing.
Who can say?  Some people believe that we should "live in the now."  The me in the "now" then wanted to find out about this potato and the salad it would make.  Burning with curiosity about a yam.  That's so weird that it's got to be worth something.
Posted by Unknown at 12:56 AM 1 comment: 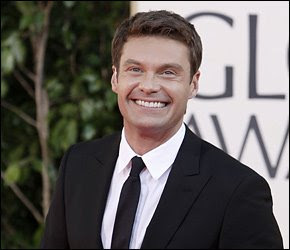 Am I supposed to be impressed by this guy?  What the hell is that expression on his face?  Fake what?  Fake with energy.  Lots of energy there.  "This really sucks!  Yeah!  Awesome.  Heh heh heh."
Ryan Seacrest.  I've heard of him but I don't know what he does.  I could wikipedia him but I don't really care.  Some T.V. thing.
He turned up on the Washington Post homepage a second ago when I started up safari to check the weather.  I will give him that his expression is arresting.  I blogged about it after all.
Moving on, Fay has a stomach ulcer.  Her general condition has also declined a bit and she's had a UTI for two months that her antibiotics haven't seemed to help.  We've changed the antibiotics and we're hoping that that and treating her ulcer will make her feel better.  If she feels better she might move better.  We're hoping because we can't up her prednisone dose due to the ulcer.  So she's on six different pills now but I don't think I'll be giving her any shots this month.  Maybe?
Here is the new website I'm not allowed to go to anymore because I can't go there without buying something:  Momiji!  So cute!  Cheaper than shoes too.  Here's a prettier picture (than R.S., above) from the Momiji site: 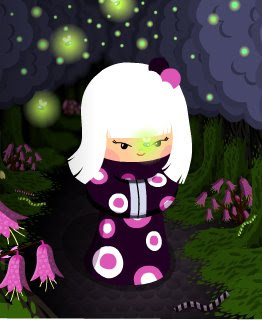 Someone there gets paid to make these adorable Flash animations.  I'm jealous!
In other news I read Bono's Op Ed piece in the New York Times today.  He was reminiscing about Frank Sinatra.  He quoted Sinatra as saying, "Being modern’s not about the future, it’s about the present.”  I thought that was really interesting and true.  As I've said before, my present is usually really great but for some reason I often try to avoid it.  I seem to prefer some crazyland that my head's dreamed up.  Like one of those Momiji flash animations.
According to Bono, Sinatra had the guts to live in the present and constantly confront reality.  I guess he might have done that as much as any famous person can.  I can admire that.  I wish I was better at it myself.  However I'm glad I'm not as hard as Sinatra appeared to be.
I also read the article on Calvinist hipster preacher (huh?) Mark Driscoll, entitled "Who Would Jesus Smack Down?"  Calvinism.  Lots to think about there.  If you want to bother.  Maybe you'd rather wikipedia Ryan Seacrest?  Maybe you already know who he is and don't need to.  Anyway, The Driscoll article was pretty interesting.  People are...weird.  "God says I'm better than you and nothing that you or I can do will change that.  You're going to Hell and I'm going to Heaven.  No matter what!  HA HA HA HA!  SUCKER!!!!!"  It made me think about some of the jerks from high school who I know to still be jerky.  Come to think of it maybe you don't want to read that article.  Why think about jerks if you don't have to?
My present contains no jerks.  I'm going to be like Frank and enjoy my present.  At least for the next few minutes while I can keep myself from drifting off into some candy-crammed fantasy land.
Posted by Unknown at 8:27 PM 1 comment:

Check Out My Birthday Cake 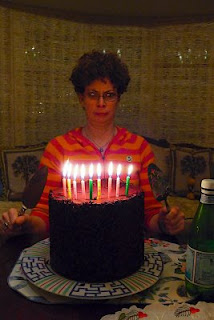 Not the most flattering shot of me but the cake looks good.  It's every bit as big as it looks.  I got that nice, loud sweater I'm wearing for Christmas.
Posted by Unknown at 5:05 PM 4 comments: 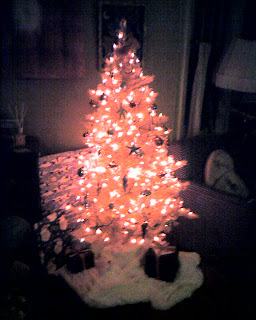 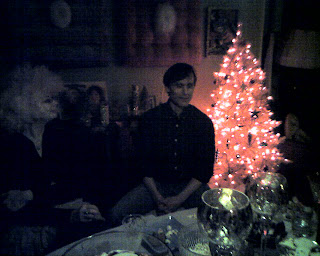 Thanks Jamie for taking these photos of our Holiday party with your cellphone.  I did go to a little bit of trouble to match my wig to our Christmas tree so it's nice that I have at least something to show for it.  Next year maybe I'll light my wig too.  It would show up better in cellphone photos that way.  I'm not putting in ornaments though.  That would be too distracting while serving hors d' oeuvres.
The dude in the photo is our friend Steve.  We were having a very serious conversation about suppressed rage.
Posted by Unknown at 6:48 PM 1 comment:

The Color In My Head Today Is Red

Alrighty!
I ought to be unpacking but I'm lollygagging instead.
Pete, Fay and I caught a red-eye back from San Diego last night.  Pete's been very practical and productive, unpacking and making sure that the snow that fell in our absence is properly removed.  He really hit the ground running.  He even got himself a new pair of eyeglasses to replace his famous "Pano" frames which he lost on Thursday.  You can see them in the photo at right (on the main blog page)
Me, I'm zombiefied.   I could blame jet lag but really I'm just indulging in my usual inability to deal with logistics.  Today I'm just not trying.  This could cause me big problems later in the week.  I guess I'll just have to look forward to cursing myself in a few days.
I'm just so easily distracted by pretty things.  Because I like to be distracted.
It was my birthday on Thursday.  I got a lot of great presents for my birthday and for Christmas, including some gift cards which I'm thinking about how to SPEND.  Will I cool it and save them for later when I really need something or will I go off half-cocked in a giddy spending spree?  Time will tell.  Place your bets.
So today I can't get enough of the color red.  I think I'll put on some red lip gloss and go unpack my behemoth suitcase.
Posted by Unknown at 5:05 PM No comments: