What You Get When You Ask For Mayhem

If you look on my other blog you can see that Fay has had some messy health problems lately, one being an infected rear end. Her back half is mostly paralyzed but even she could tell that her butt had turned into a lava-spewing volcano. She was obviously hurting.

Twenty-four hours, a trip to the vet and a few stepped-in turds later I have devised Fay's Buttcare System. Figuring out the system was stressful and confusing. It involves antibiotics, anti-fungal ointment, astringent compresses and keeping her from sitting on her butt. Keeping a dog from sitting on her butt is not an easy task. Fay's neurologist was kind (and handy) enough to make Fay some "donuts" to wear around her legs that raise her back business-end off the ground enough to prevent chafing.

Fay's wheelchair also keeps her off her butt quite handily and makes the compress and ointment part of her treatment possible. 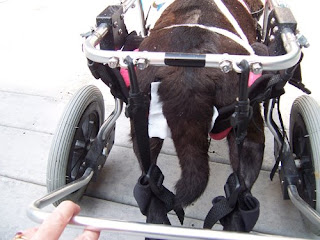 That's the compress. You can also see that her wheelchair accomodates her donuts in this photo.

She's seeing much more chair time than ever before. This is doubly good because when I let her out she's really tired and doesn't want to drag herself around on her butt.

Even though I hadn't worked the bugs out of The System last night Fay's feeling much better today and her rear looks much better too.

One thing has become very clear from this week: it is crucial to avoid Fay having diarrhea.
Posted by Unknown at 1:57 PM