Yeah, There Are Cuss Words In Here

Isn't life confusing? So much to do, so much to think about. So much shit raining down on you, so many beautiful experiences to have at the same time. I pity the three pounds of mush that has to try to sort through it all for each one of us. What an experience!

Then there's all the stuff we don't take in because we aren't physically capable of it. Puny human mind boggling.

How am I supposed to pick a topic to blog about with all of these amazing, confusing things going on? The answer is, "Just fucking pick something."

Have I changed at all since June? Can you tell? Eh, whatevs. According to my meditation books (and a whole lot of science books) we're all changing all the time. Any perception of personal consistency we have is an illusion created by our brain. Brains are so cool. They make order for us where there is none. I wonder why we need it (order) so much?

So here's my topic for today: aging, mine specifically. I need to come to terms with it.

Yesterday I read that most cells in your body have short life spans. They die and are replenished regularly. Neurons are different. The neurons in your brain are the same ones you were born with. This is why I can be forty-six years old and still think I'm twenty-three or feel (or act) like an eight-year-old.

When I'm walking around doing stuff I have no idea how old I am and I don't care. That's as it should be. It doesn't matter. So it shouldn't bother me that I don't look like I think I do. Right? It doesn't really matter.

I was not careful to take good photos of my costume last night. Pete took a few though.

This is the best one of my costume but I don't like it because I look wider than I'd like to and because you can clearly see my saggy old lady neck. Gah! I would like to think that my neck doesn't look like that all the time. I can't see it so what do I know?

But it doesn't fucking matter, does it? Why spend a moment's  energy on it?

Moving on, that was a pretty good costume. I don't think the hair is quite right for the character but it'll do for Halloween.

This photo is more like what I was going for: 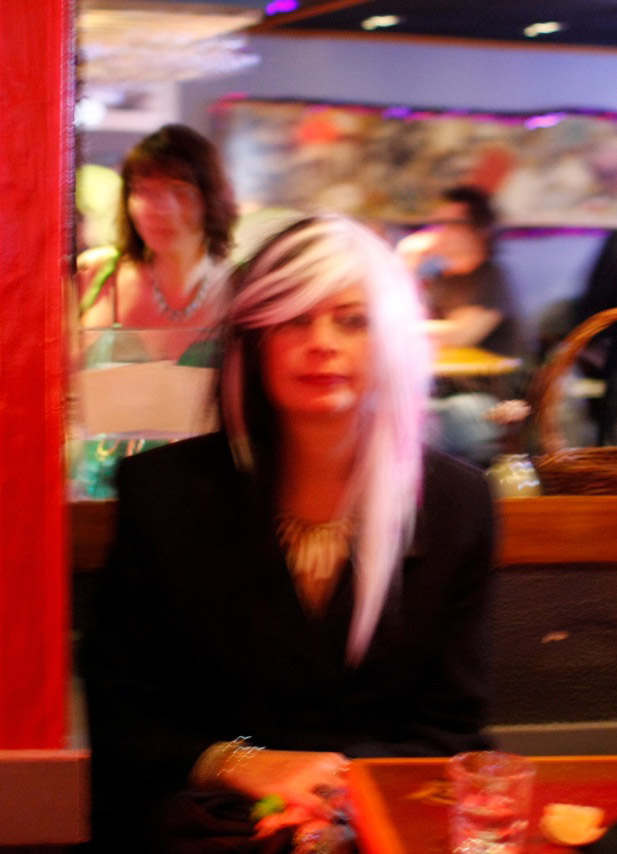 Of course that's blurry so I can believe what I want to about my neck. You can't see the leggings or the shoes though. The woman behind me in the picture had been in front of me earlier. She had the worst posture. Her head was disappearing into her shoulders. It gave me a backache to look at her.

So where was I going? Something like I need to get over any feelings of concern about my aging appearance. There's nothing I can do to change it. There are far more important (and interesting) things I could be spending my time doing. Although coming to terms with and accepting reality is a valuable pursuit. One more miracle of life to encounter and appreciate. A gift of impermanence: another challenge to tackle and subdue.

By the way, I'm wearing a mini hat: 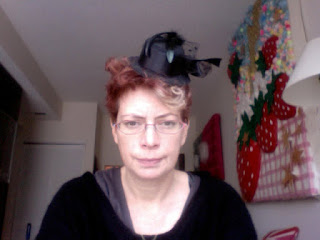 I think you're still gorgeous!