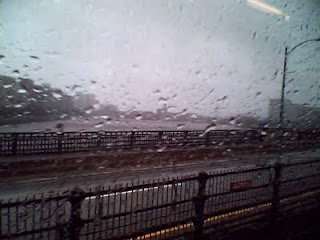 Today is a good day to take the T if you need to go anywhere.
I needed to go somewhere because my hand mixer died. That put a crimp in my cookie-making plan.
So I made a quick trip downtown to pick up a new one. I was almost blown off my feet crossing Copley Square. On the way home the rain was blowing so hard I couldn't see through my glasses. Also, there was a fantastic guitarist in the red line section of the Park Street station playing samba music and Christmas songs. Unfortunately I was on the wrong side of the tracks to give him some $. That man should be encouraged.
Now my first twenty cookies are cooling, the second twenty are baking and the last twenty are chilling in the fridge. I'm going to have to figure out a way to festify them though - as it is they look like brown blobs. Hello powdered sugar.
As for the dead mixer, I think I bought it at Bradlees in 1987 or something. It wasn't a spring chicken and it owed me nothing. My new mixer is red and has super powers. If that's not Christmassy I don't know what is.
And as for Pete, he's snowed in up in Vermont. They got over a foot up there. And Fay has the runs. So he's having a good day.
Posted by Unknown at 4:10 PM

I was all happy, happy... what great fun.

Then I read the last line.

I have part one, but not part two of that last sentence. Part one is enough all on its own.

I really like that photo; is that the Longfellow Bridge?