Am I Writing About Baseball? 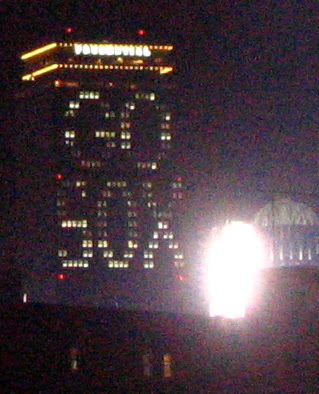 I have to say that going to a World Series game was very exciting. Don't kill me but I'm not a huge baseball fan - no, I don't think the ticket was wasted on me. An experience is an experience.

I'm happy to report that the National Anthem was not sung by Carly Simon or Steven Tyler or by any of the New Kids on the Block. They had John Williams write and conduct his own arrangement and it was played by the Boston Pops.

The most viscerally exciting part for me came next: the flyover by the Vermont Air National Guard. Four F-16s. LOUD, core-shaking, exhilarating, frightening. It gave me the kind of deep, dark thrill that I've been relishing so lately. You know, enjoyment of something it's wrong to enjoy? How could I think that flying a war plane is SUCH A COOL JOB!!!???? It was so cool.

Then whoever was left of the '67 Sox came out with Carl Yazstremski to throw out the first pitch. Good to see Yaz.

The game itself was easy to watch for a Boston fan. Everyone knows the Sox won 13 to 1. The first few plays were mayhem for the fans. By the fourth inning it seemed like everyone was taking it like an ordinary baseball game. By the sixth inning I felt sorry for the Rockies. Pete and I left early in the eighth inning to avoid getting stuck in a sea of jubilant yahoos. It takes a lot for a Red Sox fan to feel confident enough that they're not going to lose that it's okay to leave the game early. I took a moment at my favorite spot in the ballpark, right where you first come out into the stands, and said goodbye to my World Series experience.

Yeah, it kind of rained but it was a beautiful night. If you have a large pile of extra money and a chance at some tickets, you might want to try going to a World Series game.
Posted by Unknown at 6:15 PM