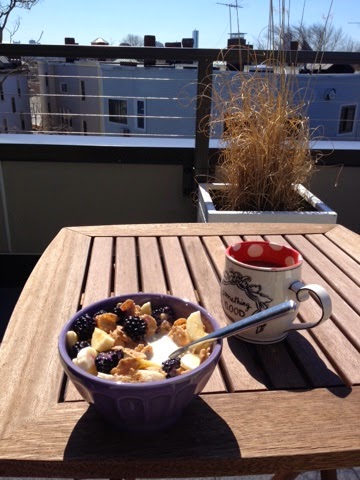 I'm roof-decking this morning. First breakfast on the roof deck this year. Perhaps some champagne is in order. That won't happen though because I'm not drinking these days.

I have been gardening in the back yard in Somerville. Our building was built on a site where an old garage once stood. I think the garage was built in 1910/1919. It was there until maybe 2013. There's a lot of weird stuff in the soil back there.  Some examples:


Let's see if I can get a view of what I've done so far from above without dropping my phone off the roof.

Ooh! Here's one with the bike rack that was demolished by tons of snow!

I have planted two roses (with another on deck, waiting to be planted) three hellebores, two clematis vines and eleven Lilies of the Valley (it would have been 12 but one rotted in the mail 😕 frowny-face emoji) One of the two hydrangea plants I put in in the fall didn't make it. There is, as yet, no sign of the black Parrot Tulips I put in either. They are late season bloomers and I've never tried them before so I don't know what to expect.

I plan to add a lot of compost to this soil. I'm also going to try to grow sunflowers in an attempt to remediate soil contamination. I don't know exactly what's in this soil but with all the stuff I'm digging up it can't be good or safe.

Spring has come late to New England this year but here it is. We're ready. Even I am ready.

Email ThisBlogThis!Share to TwitterShare to FacebookShare to Pinterest
Labels: gardening, Posted from my phone, Somerville, the seasons

Looking good so fhaven'thave things cleaned up in our yard, but have some boxes to replace. Perrenials were coming up before we left for vacation, but not sure what things look like now. Too dark when we got home.