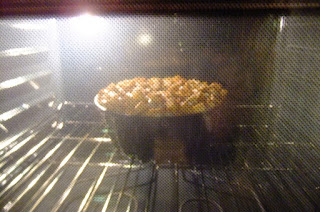 I haven't tried this recipe before. It's from Smitten Kitchen. It makes a doughy batter into which you stir four eggs, one at a time until each is incorporated. Then the batter becomes pourable. I haven't made a cake with batter like that before either. Ah, yes, I should also mention that the large lumps you see are chopped apples. There are two layers of chopped apples macerated in cinnamon and sugar.

When I looked at the volume of all the ingredients separately I didn't believe they'd all fit in the pan. I wedged 'em in there. I hope it doesn't take two hours of oven time because of all the stuff in that pan.

It's for a party I'm going to on Saturday. I met the hosts once then got invited to this party. I'll only really know two people there but I'm going. This is how I'm branching out and expanding my life. I'm bribing strangers to deal with my social awkwardness with home made cake! Brainy!

So here are photos of some of the drawings I did at our drawing party in chronological order: 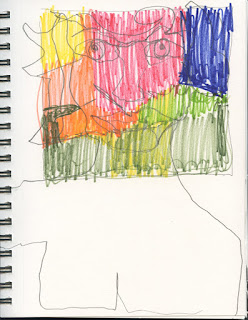 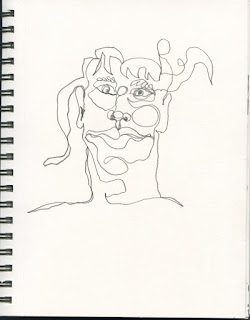 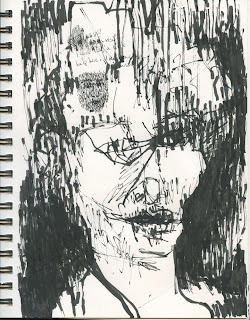 Then I thought I'd go more experimental and use a pen with a nib that you dip in ink. There were a couple of different nibs used here. I've never tried this before. I'll try it again soon though. 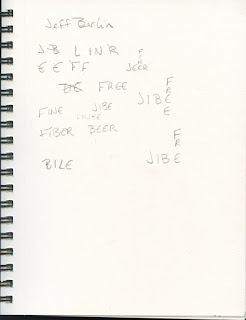 At this point one of us had been drawing pictures of our friends incorporating anagrams of the friends' names. He was using an anagram app on his phone but we found the anagram for our friend, Jeff, inadequate. I was trying to figure out a better one because I am WAY smarter than an app, particularly after two Guinnesses. Yeah. That was a big success. See how I tried to use some vowels twice with a crossword technique? That didn't help. 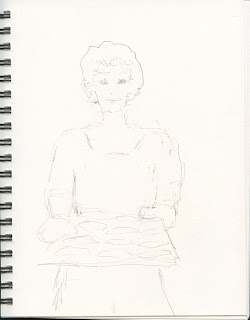 Then I drew this kind of terrifying thing. Creepy blonde lady offering you cookies or something. I'm suspicious. 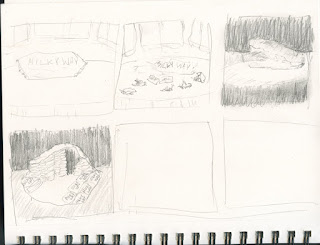 The last drawing I started on at the party was the kind of thing I had intended to draw when I had the idea for the party in the first place. The original idea (if you don't feel like clicking that link) was to have a party loaded with friends and  some beers to entice me to do the kind of drawing I'm bad at. Looking back I think I did accomplish that goal. I did try to draw in ways with which I am unfamiliar and the results show a distinct willingness to fail. 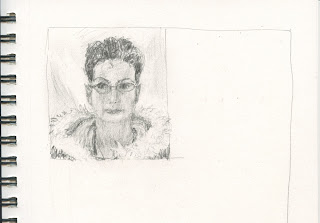 The next day I did this self-portrait to see if I could still draw at least as well as I did in high school The answer is yes. Slightly better in fact. This drawing is pretty small, about 2"x3". A bit wooden and sad but the likeness isn't horrible. A fairly quick drawing. I think my drawing teachers from art school would be disappointed but they'd be nice about it.

When I'm serious about drawing I don't use a pencil or pen so all of these drawings are a break in tradition for me. When I'm serious I use compressed charcoal and really big paper and a chamois (the kind you get for washing cars), a large eraser and maybe some sandpaper. It makes a huge mess - big piles of black charcoal dust and erasing crumbs on the floor. I really get into it. It's pretty physical. I find sketchbooks limiting. Pencils are too small and fine for if I'm really going to DRAW.

However, if I thought about it and really tried I could probably figure out a way to make a pencil or a pen work. People who are not me manage to make true art with those implements. I could do better than I have done.

I think that we all had a good time at the party. I had such a good time that I was really sad when it was over. I stood on the street corner with Pete and I didn't know what to do. The light had gone out of my life. The party was over.

Fortunately it was just about dinner time and Pete suggested we stay out and get a bite. So we had a nice dinner at Central Kitchen. Thanks, Pete!

Wow, restaurant websites tend to really suck. Too much flash! Too many fancy doo-dahs! People do not want things flashing in their faces when they're trying to find a menu or hours of operation.

Back to the topic at hand. I'm going to make this drawing party a regular thing. I want to do it twice a month. I think it's a great idea for me to practice willing public failure. If you're an artist you should be incorporating failure into every day. I feel that I do that. But I do it in private. It's easy, in private, to fail or to shirk failing. I guess I'm saying that I feel I don't fail well enough. These drawing parties are, for me, a fun place to fail publicly. This is a great habit to develop.

If I do this twice a month I can practice failing and exercise my drawing muscles and socialize. Win, win, win.

I know that if people have an option to come twice a month they're less likely to come at all. They'll figure "oh, I can always go next time." I do stuff like that myself. But damn it, I'm going twice a month.  If too few people show up and I get demoralized and feel far too unpopular then I can always cut it back.

Now here's how the cake came out: 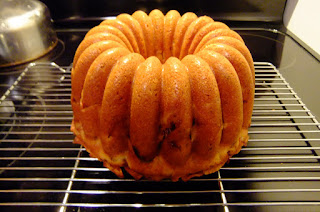